On Monday's show, Keith Uhlich will be joining me to discuss his life as a cinephile. We also have a conversation regarding Jonathan Demme's The Truth About Charlie, his 2002 remake of Charade. I'm thankful that Keith provided me with his original review of the film, which was then written for Culturedose.com, which became Toxic Universe and then Culture Cartel before it finally shut down. With Keith's permission, I've posted his original review (no longer online) with some very minor revisions by him. He wrote this prelude to the piece:

Clive Barker wrote, "We are our own graveyards; we squat amongst the tombs of the people we were." The person that authored the words below is almost ten years gone. I'd like to slap him upside the head for his oft-clunky phrasing and stiff-necked swagger. But I also see the fire and spirit (the stalwart belief in humanity, even when confronted with the worst the species has to offer) that I continue to kindle and cultivate. Aesthetic and technical embarrassments aside, I'm happy this little shit-stirrer haunts me still.
—Keith Uhlich, 08/24/2012

Here’s the one this year that got away.

Jonathan Demme’s The Truth About Charlie is ostensibly a remake of the 1963 Stanley Donen comedy/thriller Charade and that alone practically guaranteed the film’s financial failure. Charade is an example, after all, of the perfect Hollywood film: attractive stars (Cary Grant and Audrey Hepburn), ingenious script (by Peter Stone), memorable setting and atmosphere (using both real and make-believe Paris locations) all combine for an entertainment that fires on all cylinders. If that sounds like too mechanistic a metaphor, then perhaps you’ve caught onto what we might call the weakness of Charade – it works so perfectly that the pleasures it gives can feel like perfectly placed manipulations, cogs in the wheel of the Hollywood machine. No matter, machines can be beautiful too (and Charade is certainly one of those perfect mechanoids), but it presents a daunting challenge to the crazy bastard who wants to try his hand at revisiting the material. The obvious question: Why remake perfection?

Jonathan Demme, our country’s resident crazy bastard moviemaker (I mean this as a sign of affection, Jon), provides an answer and the results, to my mind, are phenomenal. Reveling in his true colors as a humanist cinephile Demme takes the template of Charade’s plot (widowed female harassed by several people who are after her dead husband’s fortune) and runs with it through present-day Paris. The ‘white’-washed settings of Donen’s film give way to Demme’s multicultural playground; all races and creeds make their way in front of Demme and cinematographer Tak Fujimoto’s always inquisitive hand-held camera. A street corner passerby may become integral to the story, or they might just be an ephemeral fancy that the camera finds interesting enough to linger on for a moment. One such latter instance yields cinephilic dividends: French New Wave director Agnes Varda unloading umbrellas of Cherbourg in a Paris back alley. If you get the jest, this is your kind of movie.

Demme’s is a Paris far removed from the Hollywood factory. Aside from being merely a setting the city is also a participating character. Quite comically, Demme’s Paris often intrudes on Charlie’s thriller plot. The monetary reward that was so important to the characters in Charade is subsumed here in the hustle and bustle of the locale. Demme has always seemed an artist more interested in the work itself as opposed to its potential for monetary gain, and his refutation of Hollywood-style greed is on full display in Charlie’s light-hearted tone. Most welcome too are Demme’s benevolent politics. A climactic, guns-drawn showdown becomes a thought-provoking pacifist statement, something akin to Hollywood cliché as rethought by Jean-Luc Godard. In our country’s present state of knee-jerk ethnocentrism Demme’s “lightweight entertainment,” as some have labeled it, has more profound things to say than most politicos and their speechwriters could muster in a years-long campaign.

But back to movie things. The inevitable comparisons between the original Charade’s and Charlie’s casts make up the crux of the critical naysayer arguments. Thandie Newton as the widowed Regina Lambert has enough of Audrey Hepburn’s joie de vivre to get off easy in the critical bashings, but poor Mark Wahlberg as man-of-many-faces Joshua Peters can’t possibly live up to the daunting Cary Grant persona. And the truth is, of course, that these two actors are nowhere near Grant and Hepburn’s stature. But to that unavoidable fact I posit this question: So what?

The Grant and Hepburn personas couldn’t exist nowadays because, to quote an oft-used cliché, “times have changed.” And yet there’s a level of nostalgia built into a cinephile’s life. Movies of our youth often entrance us in the heady rush of adolescent passion that is both a blessing and a curse. Over time we develop stronger critical faculties; we define our specific tastes and make more authoritative choices. Thing is, our honed distinction can often lead to a fuddy-duddy mindset where we reject what’s new because the old guard supposedly did it better. Much harder is it to be open to the ever-changing tide of artistic styles and ideas. Certainly we should never reject the past (it has way too much to teach us), but nor should we lament its passing into the context of history. So where does that leave us? In Charlie’s case it leaves us with Wahlberg and Newton, and it is a testament to Demme’s talent that he doesn’t attempt to make them into Grant and Hepburn. Rather, Demme uses their physicality and individual personas as a contrast to the Hollywood kind of love Grant and Hepburn embodied. Aside from the film’s nonchalant treatment of interracial love Demme represents this inversion literally by reversing the male lead’s name: Grant’s Peter Joshua becomes Wahlberg’s Joshua Peters. Thus is the character imbued with several levels of contradictions. Wahlberg’s brutish, muscular body and off-kilter baby face are at odds with his character’s attempts to be the dashing playboy. An early sequence has him wearing a beret that seems ridiculously out of place. The audience always laughs, and not comfortably so. Yet, like a bullied nerd who’s grown a set of cajones, neither Demme nor Wahlberg apologize for the odd dress. They are not uncomfortable. We are. The challenge to the audience comes not from the beret itself, but from the decision that it be worn throughout the movie, perhaps as a jolting reminder of the Peters character’s shifting loyalties.

Over the whole of the story Wahlberg changes wardrobes and identities numerous times and only at the climax, sitting alone in a nondescript office in a half-size-too-small business suit (another Demme inversion, perhaps of David Byrne’s “big suit” in the director’s concert film Stop Making Sense), do we see the character for the sad cog in the bureaucratic wheel that he is. It’s a heartbreaking image, a reduction of traditional Hollywood ideas of masculinity to very human proportions. And so it remains for the city of Paris to finally take pity on Wahlberg’s character providing, in its own way, the film’s needed happy ending. 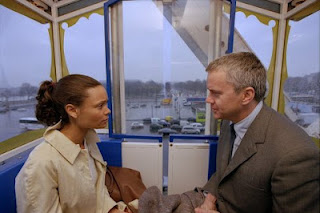 Newton, a wondrous and glowing dark-skinned beauty, perfectly offsets Wahlberg’s pretty white boy. Demme makes full use of his signature shot – the camera staring directly into a character’s face as if delving into their souls – on Newton’s visage, achieving awe-inspiring results. The power of being young and in love in Paris is reflected two-fold in Newton’s eyes. Stuck alone in her ransacked apartment in the early going she readily accepts Wahlberg’s implicit invite for a night on the town. “I need to get out of here,” she exhales. Her flirty conversation with Wahlberg in the following scene, observed in reverent silence by a smiling cab driver, ends with an indelible punchline: the characters raise two unseen wine glasses from below frame into a gentle clink. Rhetorical and hyperbolic question: Was there ever a more romantic image in the history of cinema?

Actually, Charlie is bubbling to the brim with romantic images. In addition to the central love story, Demme intends Charlie as a letter of l’amour to the French New Wave filmmakers (Francois Truffaut’s gravestone is lovingly caressed by the camera over the end credits) who were making their mark around the same time the original Charade was in production. Imagine Charade as a collaborative effort between Truffaut and Godard and you’ll have an idea of what to expect with Charlie. Demme spices up his film with cameos from New Wave acting icons like Anna Karina, Magali Noël, and Charles Aznavour (who provides several out-of-nowhere and enchanting music interludes). These representatives of cinema’s past lovingly guide the new guard through the filmic plot machinations they all know so well. Wandering like ghosts through Demme’s vision of Paris they haunt this dreamscape as both reminders and signposts, pointing the way into a joyous future where all eras of art can co-exist in transcendent purity.

Between Demme’s Charlie and Brian De Palma’s Femme Fatale it seems that Paris, the city of l’amour, is that transcendent, pure place where two of our best American filmmakers have found the elusive something that results in cinematic greatness. Like De Palma’s film, Demme’s Charlie is a spiritual experience of a kind, cognizant of its own historical muses while confidently existing in its own time and place, and all the while possessing the power to inspire those viewers willing to look closer. The truth about Charlie is that there’s so much more here than you’ve been led to believe.
Posted by Peter Labuza at 10:36 AM