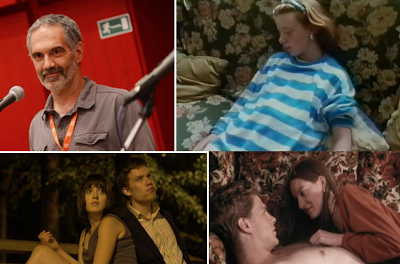 "I'm starting to realize my whole film aesthetic, everything I value about film has been intertwined around this feeling that film should be taking me somewhere and I need to evaluate not only how it's doing it, but where it's taking me."

Dan Sallitt is someone Peter considers a cinephile par excellence. A thoughtful auteurist, an idiosyncratic and insightful writer, a dedicated repertory cinema viewer, and a truly accomplished filmmaker, Dan exemplifies everything you'd want in both the classical and new forms of cinephilia. So on the eve of the theatrical run of his latest film, The Unspeakable Act, Peter sits down with Dan to trace his cinephile life. Dan discusses his first encounter with Howard Hawks, his stint at the LA Reader, and his various connections to Bazinian theory in film. The two then have an extended conversation on Dan's three films and how he uses cinema to explore some truly unique subjects. Finally, they dive into Alan Clarke's Christine, a film as brutal as any work of social realism, yet abstracted to a point of pure beauty.

"The Films of Dan Sallitt" begins February 28th at Anthology Film Archives. Learn more about the series here. Watch All the Ships At Sea and Honeymoon on Amazon Instant.
Follow the Facebook Page for The Unspeakable Act.
Read Dan's work on Mubi, Senses of Cinema, Slate, and Thanks for the Use of the Hall. A collection of Dan's older works can be found at his website.
Follow Dan on Twitter.

Episode #13 - C. Mason Wells (The Story of the Last Chrysanthemums)

"I think it's the duty of people to find whatever excuse they can find to show obscure movies. You need to have a reason to dig up these things, but they have to be seen."

It is a little odd how similar Peter and his guest C. Mason Wells are in certain ways. Both are New York cinephiles from the Midwest who are also passionate fans of Andrew Sarris Both went to Columbia University (and both participated in one of its oldest traditions), and now both are 35mm repertory junkies. However, Chris diverges in that often he's the one programming the great content, while Peter simply writes about it. Chris takes Peter through his journey of becoming a cinephile, including his work making films like LOL and The Color Wheel, and eventually how he found himself programming. The two give a look at his latest series, "Andrew Sarris: Expressive Esoterica," dedicated to the late critic, before diving into Chris's favorite film of all time, Kenji Mizoguchi's powerful 1939 drama, The Story of the Last Chrysanthemums.

Read more »
Posted by Peter Labuza at 9:30 PM No comments: