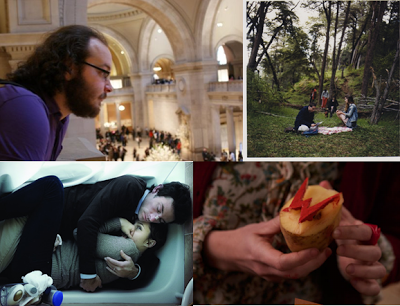 Where do great directors come from? Since 1969, the New Directors/New Films festival has searched around the globe for the directors and cinemas that will soon rank among the canon. And certainly it has a strong history for accomplishing that with names like Pedro Almodovar, Steven Spielberg, Wong Kar-Wai, Spike Lee, and Chantal Akerman. So in a world of digital releasing and festival saturation, what can ND/NF offer? Joined by the very smart Daniel Walber, Peter takes a look at this year's impressive slate, focusing on a trio of unique films as well as some of the other highlights. Does Shane Caruth's Upstream Color transcend its complex science fiction narrative? Does Viola's brief running time and light hand build something more textured? And why exactly is Leones the "future of cinema?" All this and more in this special episode.

In 2011, a young cinephile named Ignatiy Vishnevetsky became the poster boy for new cinephilia during the return of Roger Ebert's At the Movies. But there's much more to Mubi's esoteric and erudite critic than his days on public television. Recorded over two snowy Chicago days in January, Peter sits down with Ignaty to discuss how his Russian heritage influenced the way he watches movies, his interactions with the video store, and his very twisted process to writing criticism. They also discuss his obsession with images in 21st century filmmaking and cinephilia, the rise of vulgar auteurism, and the moral guidance than drives his writing. Finally, Ignatiy introduces Peter to the intoxicating world of Alan Rudolph through his impressionist work The Moderns, a film that might long for an image of the past, but asks us to question the context in which we view them.

Read Ignatiy's work on Mubi, Cine-File, the Chicago Reader, and his blog Sounds, Images. View episodes of Roger Ebert's At the Movies.
Follow Ignatiy on Twitter.