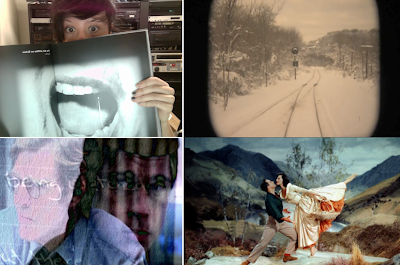 "The way we use cinema is changing, so the way we examine it should
change to fit that a little bit more."

Many of Peter's guests have expressed their feelings about cinema through words. Gina Telaroli prefers images, both moving and still. The experimental filmmaker, image essay maker, and critic sits down with Peter for a very engaging conversation about her work and passion. The two dive into her frame-by-frame analysis of classic Hollywood films and the "unconscious cinema" she unlocks, as well as her obsession with Hollywood workmen Allan Dwan and William Wellman. Peter also gushes about Gina's films Traveling Light, and asks her numerous questions about what he sees as a spiritual work of cinema. Finally, Gina brings in Vincente Minnelli's Gene Kelly-Scottish set musical Brigadoon, a haunting work that both read as a metaphor for the magic and miracle that is cinema and 35mm.

"I think it's always interesting to ask what does this movie imagine it's audience to be...If we can say making and releasing this film is an act of communication, who do you want to see it [and] what do you want them to see?"

One year into The Cinephiliacs, Peter brings in a critic that he's read for almost a decade now: A.O. Scott of the New York Times. Tony joins Peter for a traveled conversation about his entry into cinephilia at the repertory houses of Paris and Cambridge, his thoughts on the craft of writing, and how to think about films in the context of their audiences. Tony also explains how he comes up with those "trend" pieces, the phenomenon of "critic proof" movies and why they matter, and the patterns and differences between recent American literature and film. Finally, the two discuss Robert Altman's The Player, which continues to be the only contemporary successful satire of Hollywood, perhaps because it so closely plays the line between satire and seduction.