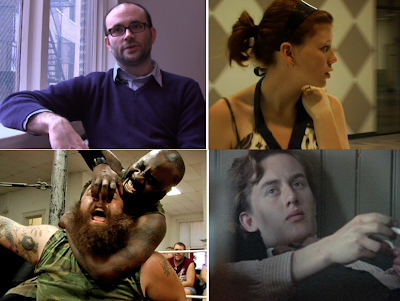 "We want to make movies that are just as surprising and weird and unwieldy as the movies we love...they just happen to start from a non-fiction point of view."

Robert Greene jokes that he badgered Peter into finally watching his two documentaries, Kati With An I and Fake It So Real. But he certainly didn't badger Peter's opinion of recognizing a true non-fiction talent, someone who is taking the form in new directions through both theory and practice. Robert joins Peter on the show to talk about how he went from a lover of 2001 and Star Wars to a man obsessed with non-fiction cinema, and discusses how he thinks filmmakers can approach their subjects with both approaches to form and content that can compete with the best fiction films. Peter then engages Robert to talk about his own practice to making films, and why limiting his options ultimately freed him in the form. Finally, Robert brings in Peter Watkins's Edvard Munch, a bafflingly brilliant film that the two find plenty to discuss in terms of making a non-fiction approach to a film to encompasses the shift from the 19th century to the 20th at both the cosmic and the micro level.

Visit Robert's website, with links to his writing and films.
Follow Robert on Twitter.
Notes and Links from the Conversation
-A note on Seconds.
-The Criterion release of Seconds.
-NC State Professors: Tom Wallis, James Morison, Joe Gomez
-Information on Sean Price Williams, and Calum Marsh's piece about his work.
-Kim's Videos
-Robert's list of 2012 Cinematic Non-Fiction
-Only the Young
-How to Survive a Plague
-Scott Tobias on the "cinematic" factor in documentaries
-Performances in Documentaries
-Our Brand is Crisis
-American Movie
-Vadim Rizov on the myth of the "golden age of documentaries"
-The Ross Brothers and 45365
-On Leviathan
-4th Row Films
-More on Peter Watkins
-There's an excellent transfer of Watkins's Punishment Park by Masters of Cinema, which includes an audio commentary by Robert's mentor Joseph Gomez.
-For more Greene goodness, read this fantastic interview he did with Scout Tafoya.