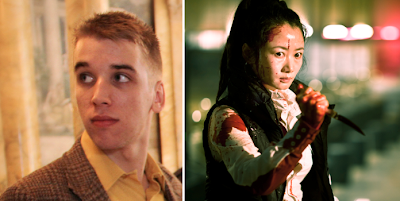 Arguably the most excitingly and dynamically curated film festival in the world, Peter returns to the New York Film Festival, now in its 51st iteration, for his 8th (!) trip and he couldn't be more excited. Thus begins a series of podcasts dedicated to the various works being presented throughout the festival, now lead by its new head programmer Kent Jones. To help him work through many of the daunting works (in theme, aesthetic, and running time), Boston cinephile Carson Lund, a blogger covering the festival for In Review Online, joins Peter on a tour through violence in capitalist China, fascism in the Northern Philippines, cruising in France, alcoholism in South Korea, and melting ice cream in Nepal. If the rest of the films are as intriguing and exciting as those covered in this first podcast, NYFF51 might just be the best festival yet.

Visit Carson's blog, Are the Hills Going to March Off?, and his work on In Review Online, Mubi, Dig Boston, and Boston Viewfinder.
Follow Carson on Twitter.
Notes, Links, and Corrections from the Conversation
-Jia Zhangke's A Touch of Sin
-A brief piece on the history and reception of A Touch of Sin in China
-Yu Lik-Wai, Jia's cinematographer, interviewed by Ignaity Vishnevetsky
-Glenn Heath Jr. on A Touch of Sin
-Hayao Miyazaki's The Wind Rises
-A obituary for Jiro Horikoshi from 1982
-Daved Jenkins on The Wind Rises
-Alain Guiraudie's Stranger by the Lake
-Some brief info on Alain Guiraudie
-Keith Uhlich on Stranger by the Lake
-Some information on Leap Year and The Sea Gull (also known as A Woman of the Sea)
-Lav Diaz's Norte, End of History
-A brief history of Marcos and fascism
-Boris Nelepo on Norte, End of History
-Both Carson and I were delighted to here that after recording this, Norte was picked up for distribution by Cinema Guild!
-Hong Song-Soo's Nobody's Daughter Haewon
-The actress in Nobody's Daughter Haewon is Jane Birkin, who appeared in films by Jacques Rivette, Jean-Luc Godard, and had a long relationship with Serge Gainsbourg.
-Vadim Rizov on Hong Song-Soo
-Sean Gillman on Nobody's Daughter Haewon
-Nobody's Daughter Haewon does not have a distributor.
-You can watch HaHaHa and Like You Know It All on Hulu+ and The Virgin Stripped Bare of her Bachelors, Woman is the Future of Man, and In Another Country on Netflix.
-Stephanie Spray and Pacho Velez's MANAKAMANA
-Adam Nayman on the history of the Sensory Enthography Lab
-Interview with Spray and Velez
-Peter Labuza on MANAKAMANA