Remembering James Agee (The Night of The Hunter) 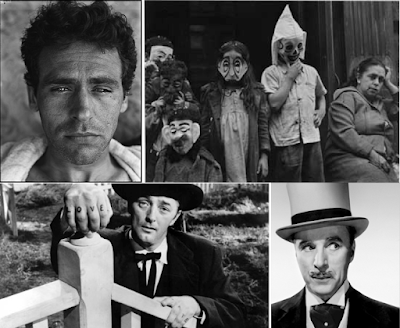 "It is my business to conduct one end of a conversation, as an amateur critic among amateur critics. And I will be of use and of interest only in so far as my amateur judgment is sound, stimulating, or illuminating."

May 16th, 1955—60 years ago before this recording—James Agee died of a heart attack in the back of a New York taxi at the all too young age of 45. In his wake, he left a mountain of unprecedented writing, including the foundations for the first wave of serious film criticism in America. In this special episode, Scott Nye and Kristen Sales join Peter to discuss Agee's work and life. From his Southern roots in literature, including his poetic depiction of the depression, to his adoration of the silent comedies and vitriolic defense of one of Charles Chaplin's most contentious films. The conversation spreads from criticism to narrative prose to photography and finally to Agee's work within the moving image, especially his contribution to one of the all time great films, The Night of the Hunter.

"I like being able to walk down the street and see all these hints of a movie that I've loved.'

From the ghostly fog of Vertigo to the vigilante ethos of Dirty Harry to the geometric paranoia of Zodiac, San Francisco has been a curious site for the movies. It's also an amazing land for cinephilia, and Brian Darr, a writer, programmer, and curator of the blog Hell on Frisco Bay, has made it his mission to trace how cinephilia continues to thrive through the city's repertory, experimental cinemas, and beyond. Brian traces his cinephilia from middle America to Thailand and back to San Francisco, slowly expanding his canon along the way. From there, the two discuss the way the city grew as an alternative to Hollywood, its use for both commercial and art filmmakers, and how the city grew such a reputation for celebrating the cinema of yesteryear. Finally, Brian brings in beat poet Christopher MacLaine's 1953 film The End, which presents both an apocalyptic discourse of living at the end of days, but also presents new ways of thinking and watching cinema.

Read Brian Darr at his blog, Hell on Frisco Bay. You can also read him at Senses of Cinema and Keyframe Daily.
Maclaine's The End is available on Treasures IV: American Avant-Garde Film, 1947-1986. You can also watch the first 10 minutes here.
Read more »
Posted by Peter Labuza at 9:05 PM No comments: