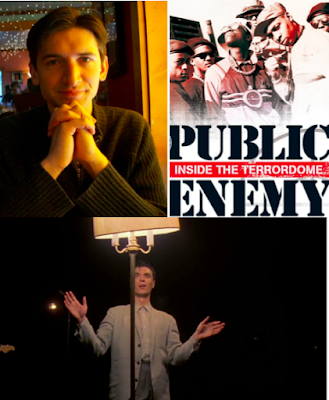 "This idea that has always stayed with me is that movies are an art form for everyone."

After first watching Spike Lee's Do The Right Thing, Peter went through a phase of going through the albums of Public Enemy. They were loud, rambunctious, and meant something in the same way the films he watched. But what happened to them after the summer of 1989? Tim Grierson's new biography of the group examines that question of perhaps the most important hip hop artists of all time, tracking both their meteoric rise and through their much-more-interesting-than-you've-been-told years that followed. Since Tim also works as a film critic, he sits down to trace his origins as a Midwestern boy coming to Los Angeles, his mindset for writing, and of course his book (along with his struggle with understanding a group so different from his own identity). The two then close out the conversation with another music-movie: Joanthan Demme's concert movie of the Talking Heads, Stop Making Sense, a film of ebullient surprise and joy, while also one of the most meticulously constructed documentaries ever put on screen.

Read Tim Grierson's Public Enemy: Inside The Terrordome, which available online and at most local retailers.
Read Tim's other writing at Deadspin, Rolling Stone, Paste Magazine, Vulture, and at his blog. Follow him on Twitter.
Stop Making Sense is available on Blu-Ray and multiple streaming platforms.
Notes and Links from the Conversation
-Watch 1979's The Black Hole
-Roger Ebert on Apocalypse Now
-USC's Norris Theatre
-More about Will Leitch
-A Deadspin profile on Bob Christgau
-Scott Foundas now writes for Variety
-Tim on audience responses and Captain Phillips
-Tim on Hou's The Assassin
-Tim on Frank
-Tim's other books: Blinking Lights and Other Revelations: The Story of Eels and Wilco: Sunken Treasure
-Don't Rhyme for the Sake of Riddlin' (The PE-approved biography)
-Martin Riggs's Tongues Untied
-Dave Snyder's Music Videos: "Everything," "Welcome To The Terrordome (Fear 2011)," "RTLK"
-Chuck D on Watch The Throne
-Ranking Will Ferrel's movies
-gina telaroli recently wrote about Katy Perry: Part of Me 3D
-Angela Catalno spoke of Stop Making Sense's "no chairs" performance in our October episode.
-David Byrne interviews himself about Stop Making Sense
-Truth Claims are discussed by Michael Renov in "Toward a Poetics of Documentary"