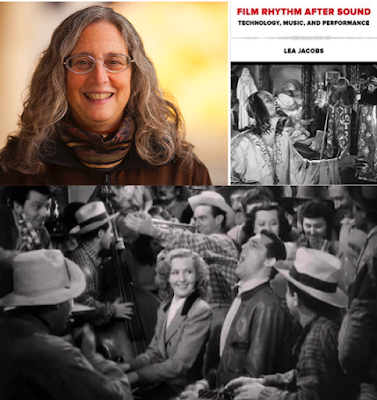 "These delicate tolerances, which are what produce a good pace for a film, are something that all film creators live with."

So often we spend our time thinking about what we see in movies, that it can be easy to forget that cinema is experienced through time, and that experience depends on a tempo. Professor Lea Jacobs at the University of Wisconsin, Madison, has been curious about how rhythm creates film, and her new book, Film Rhythm After Sound, attempts to answer what it meant for movies to not just take on sound in the 1930s, but work through new types of interactions between shots, gestures, edits, sounds, speeds, and more. Jacobs also discusses her work on theatrical stage acting in the 1910s, understanding the Production Code as an industry as opposed to just a censor board, and the importance of historical research as part of Madison's legendary film department. Finally, the two dive into Howard Hawks's masterpiece, Only Angels Have Wings, and  theorize a relationship between the film's rhythmic patterns and its unique relationship to sentiment.

Lea Jacob's homepage for UW Madison.
Read her books: The Wages of Sin: Censorship and the Fallen Woman Film, Theatre to Cinema: Stage Pictorialism and the Early Feature Film, The Decline of Sentiment: American Film in the 1920s, and Film Rhythm After Sound: Technology, Music,and Performance.
Notes and Links from the Conversation
—Watch Bojack Horseman on Netflix
—Matt Prigge reviews the second season
—The Thatcher Library in Citizen Kane
—UCLA's Cinema and Media Studies Program
—Read Christian Metz on Semiotics in Cinema
—Raymond Bellour's "The Obvious and The Code"
—UW Madison's Film Program
—Tino Bailo's book on United Artists
—Laura Mulvey's "Visual Pleasure and Narrative Cinema"
—Learn more about the history of the Production Code Administration
—The Margaret Herrick Library now hosts all files from the PCA
—Robert Stam's history of film theory covers many of the medium specificity arguments for cinema
—Pordenone Film Festival
—David Bordwell on the tableau style
—Stanislavsky on posing in acting
—For more on the issues of archives, listen to Jacqueline Stewart's talk, "The Politics of Preservation"
—A poor quality version of 1914's Uncle Tom's Cabin in on YouTube
—Jacobs on tempo in His Girl Fridaye
—Watch multiple videos with commentary for Jacobs's book here
—Eisenstein's 1928 statement on the coming of sound
—A brief explanation of "Vertical Montage"
—Counting shot length is part of a study called Cinemetrics
—Michael Barrier's Hollywood Cartoons: American Animation in its Golden Age
—Jacobs on "The Innovation of Re-Recording in Hollywood Studios"
—A scene from William Wellman's Night Nurse (1931)
—Todd McCarthy's Howard Hawks: The Grey Fox of Hollywood