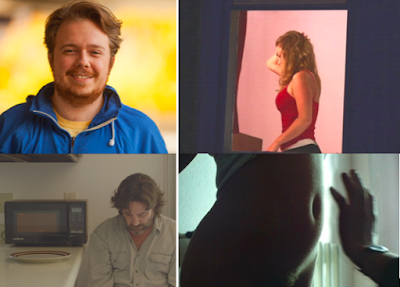 "I always think about filmmaking as trying to get it down to the most
essential thing that has to be there."

What exactly is acting, and how can we pull apart its elements for our analysis? Madison-based cinephile Brandon Colvin has been trying to figure that out, whether through his academic studies, his programming, and most importantly, his own filmmaking. Colvin is the filmmaker behind two of the smallest but most unique films this side of American independent cinema, Frames and Sabbatical, and in this interview with Peter, discusses how he merged his own filmmaking interests with his academic interests, creating and exploring the relationship between directors and performers in the current landscape of today's films. Later, they dive into one of Jean-Luc Godard's most spiritual features, the aptly named Hail Mary, and talk through why this may be the most emotional film the French legend ever made.

Watch Sabbatical and Frames on Vimeo.
Check out the site for Brandon's production company, Moss Garden Films.
Follow Brandon on Twitter.
Hail Mary is available on Google Play, iTunes, and Blu-Ray.
Notes and Links from the Conversation
—More notes on Hill of Freedom from Dan Sallitt and Vadim Rizov.
—Grand Canyon, the 1958 short that played with Sleeping Beauty
—Listen to James Hansen's appearance on The Cinephiliacs
—Jim Emerson's Scanners blog
—Brandon on the opening shot of Le Samourai
—Bordwell / Thompson
—Tarkovsky's Sculpting in Time and Bresson's Notes on the Cinematographer
—Brief history of Neo-Formalism
—Brandon on Ethnic Scandinavian theaters in Chicago
—Douglas Gomrey's Shared Pleasures
—"I never said all actors are cattle; what I said was all actors should be treated like cattle."
-Alfred Hitchcock
—Pedro Costa at Lincoln Center
—Notable Microbudget Personalities: Nathan Silver, Kentucker Audley, Zach Weintrab
—Brandon's Micro-Wave Cinema Series
—No Budge
—More on flash film photography
—Paintings by Vilhelm Hammershoi
—The Bresson Action Figure (And more on artist Jordan Speer)
—More on Anne-Marie Melville's The Book of Mary from Richard Brody
—Peter's Before Sunset comparison