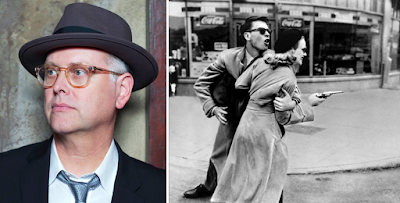 "The more people who are involved in this, they'll open the film cans."

If one were to imagine the cinema of the 1940s, the likely images would be of lonely streets, men in trenchcoats, and slender blondes lighting cigarettes while drenched in shadow. The French coined a term for it: film noir, and since then it has been a gateway drug for many cinephiles interested in classical Hollywood's most lurid pictures. Eddie Muller has been called the Czar of Noir, and he deserves the title: he heads programming for Noir City, a San Francisco based film festival that presents the city with the best of noir movies, and then heads the Film Noir Foundation to discover those lost works that no one even knows. Eddie talks about his entrance into the world of film in SF's many rep screenings and his tutelage under avant-garde artists George Kuchar, before turning to writing about the world of grindhouse movies and this lost genre. Finally, Peter and Eddie look at one of the canonical films of this era, Gun Crazy, and explore the strange production story behind one of the most violent-obsessed movies ever made.

Check out Eddie Muller's personal website, as well as the site for the Film Noir Foundation and Noir City.
Eddie's books include Grindhouse: The Forbidden World of Adults Only Cinema, Dark City: The Lost World of Film Noir, The Art of Noir, and Gun Crazy: The Origin of American Outlaw Cinema.
Notes and Links from the Conversation
—Info on Lewis Klahr's Sixty Six
—Reviews from Manohla Dargis and Kristin M. Jones
—Eddie Muller Sr. talks about SF's boxing world
—Info on George Kuchar and a longer essay on his work
—Something Weird Video
—Eric Schafer's Bold! Daring! Shocking! True: A History of Exploitation Films, 1919-1959
—Brian Darr on SF's Anita Monga
—Info on Los Talos Armagos
—Peter recently discussed Girl With Hyacinths on a podcast.
—Info on Fernando Martín Peña
—Premieres of the new 35mm restorations of Woman on the Run and Too Late For Tears
—Dillinger
—Read Peter Bogdanovich's interview with Joseph H. Lewis