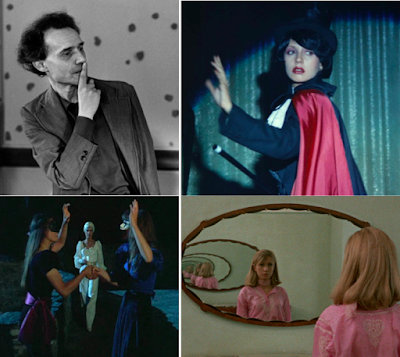 "I care more about the grace of the actors’ gestures and the quality of their voices than what they actually do or say."

The names of the French New Wave have become staples for both French Cinema and beyond. The critics of Cahiers Du Cinema like Jean-Luc Godard, Francois Truffaut, and Eric Rohmer all turned to filmmaking to put into practice the meanings they had pulled from their valorization of Hollywood Cinema. But the most passionaite of those critics, and perhaps the most creative of those filmmakers was Jacques Rivette, who passed away on January 29th at the age of 87. In this new podcast, former guests of the show (Ignatiy Vishnevetsky, Miriam Bale, and Matt Prigge) join in a roundtable discussion of the critic and filmmaker. They analyze his films, his writings, and his attention to collaboration, all of which made him a wholly unique individual in the history of cinema. Torn between his obsessions with realism and fantasy, Rivette captured the essence of the medium's paradoxical specificity.

Notes and Links from the Conversation
—Because this was recorded on four different computers across the globe, I apologize about any issues in sound levels and technical clarities.
—Rivette Obituaries by Matt Prigge and Ignatiy Vishnevetsky
—Miriam's writing on Rivette: On Games in Le Pont Du Nord, Around A Small Mountain, and five lessons in the Claire Denis-directed profile.
—Turns out the EW Top 100 list was by Ty Burr! Here's a capsule he wrote on the film in 1997.
—Jonathan Rosenbaum's writings on Rivette
—A number of Rivette's writings from Cahiers Du Cinema are located in Jim Heller's translated book.
—Read Rivette's "The Genius of Howard Hawks"
—Emilie Bickerson wrote the Verso Books piece on Rivette as Editor at CDC
—A good explanation about how Cahiers changed under Comoli and Narboni
—Rosenbaum's capsule of Paris Belongs To Us
—A Portrait of Michel Simon by Jean Renoir, or A Portrait of Jean Renoir ... Simon, or The Direction of Actors: Dialogue is not readily available, but there is an excerpt on the Criterion for Boudu Saved from Drowning. Rosenbaum discusses it further here. The full version will be on the Criterion edition of La Chienne.
—More info on Suzanne Schiffman
—Rivette's essay on Fritz Lang's Beyond a Reasonable Doubt
—Rivette interviewed by Serge Daney and Jean Narboni
—The Rivette quote above is from David Sterritt's profile of the director here.
—Watch excerpts from Claire Denis's film about Rivette, as interviewed by Daney
—The Godard quote about "allied exiles" appears in Movie Mutations