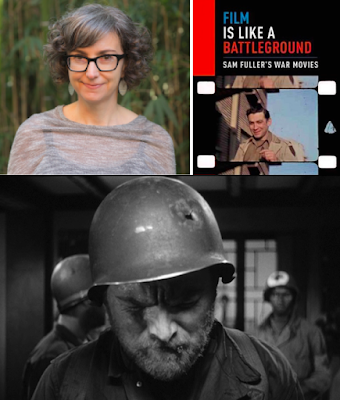 "I've always felt the superior methodology [of media studies] draws on what is relevant and material and explores all these dimensions."

You can learn a lot about the person behind a camera by watching what he saw in front. But you can learn so much more when you explore the short stories he wrote, the ideas he scribbled down, the cartoon drawings he made, the FBI memos investigating him, and the amateur footage of death he shot while serving in World War II. Film scholar Marsha Gordon has done exactly that in her extraordinary new work, Film is Like A Battleground: Sam Fuller's War Movies. In this podcast, Marsha discusses her impulses to explore both the center of Hollywood and the very margins of filmmaking practices with her research on orphan films. They dissect the role that these seemingly forgotten films have shown a diversity of cultural practices throughout the 20th century. And then they dive head onto the cigar-chomping auteur, examining what it meant to be a political filmmaker as opposed to making films that feature politics statements. They end their conversation by looking at Fuller's The Steel Helmet, a complex Korean war portrayal of men not as heroes but as flawed individuals, fighting for dignity in a situation that provides none.

Notes and Links from the Conversation
—Check out Marsha's website
—Marsha's books include Film is Like A Battleground, Hollywood Ambitions: Celebrity in the Movie Age, and Learning with the Lights Out: Educational Films In the United States.
—Other articles by Marsha: Education films by the Moody Institute of Science, and the development of 16mm by Kodak for amateur cinema.
—Robert Kolker
—The Orphans Film Symposium
—An Interview with Skip Elsheimer and his website the AV Geek
—Marsha's article with Allison Field on Felicia
—Watch the educational short Felicia
—An article on Marsha's program at the Echo Park Film Center
—Marsha's article on how GIs documented genocide during WWII appears in Film and Genocide

—Watch Falkeanu, the Impossible (1988)
—A story on Christina and Samantha Fuller
—Marsha's earlier articles on Sam Fuller: Traces of the Holocaust, Issues of Gender, and the Falkenau Footage
—Listen to our conversation with former Academy archivist Snowden Becker
—Mark Harris's Five Came Back
—Jonathan Rosenbaum discusses seeing Full Metal Jacket with Fuller
—Some info on where Johnny Had A Little Lamb appears
—More on the Bastard Film Encounter
—More on William Wellman's The Story of G.I. Joe
—Watch The Steel Helmet on FilmStruck