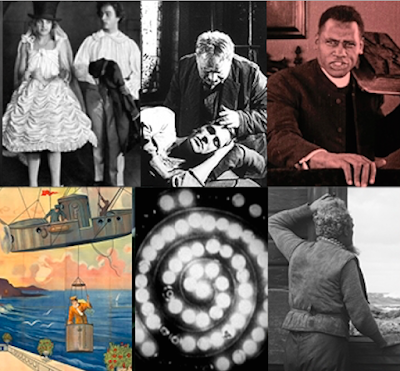 Cross-dressing air pirates, parades of mechanical dolls, directors doing their own stunts in frigid waters, and a psychological battle for the soul of Ukraine. Now attending for their third and fourth time respectively, Peter and guest Victor Morton always find a Pandora's Box of surprises at the San Francisco Silent Film Festival. Not so much for its relevance to today (sorry, no Age of Trump discussion here), but instead for the sheer amount of creativity and engagement with the world that can sometimes feel more thoughtful than contemporary cinema. This year they dive into films from eight countries over three decades, with a few from silent cinema's canonical directors, a couple from directors in need of major recognition, and finally some films that simply baffle for their sheer WTFness. It's another wrap up in the latest discoveries in silent cinema in the East Bay.

Notes and Links from the Conversation
—Victor wrote brief capsules on many of the films we discuss, which can be found through his Letterboxd
—Flicker Alley has A Page of Madness on an MOD Blu-Ray available here
—Watch a preview of the restoration here
—Learn more about benshis from Ichiro Kataoka, who continues to perform
—Serge Bromberg's Lobster Films
—Learn more about David Shepard and his contributions to the Silent Film Festival
—Films discussed in the David Shepard Tribute: Those Awful Hats (Griffith, USA, 1909), The Masquerader (Chaplin, USA, 1914), Fantasmagorie (Émile Cohl, France, 1908), Cartoon Factory (Fleischer Brothers, USA, 1924), First Prize for Cello (Pathé, France, 1907), Tit for Tat (Gaston Velle, France, 1906), Down in the Deep (Ferdinand Zecca, France, 1907), The Dancing Pig (Pathé, France, 1907),
—More on the Edison Sound films briefly mentioned
—Milestone is releasing the new restoration of Lois Weber's The Dumb Girl of Portici
—Watch Filibus and enjoy the magic of lady air pirates
—Tom Gunning on "Cinema of Attractions"
—Learn more about how films fit into early Parisian life with Vanessa Schwartz's "Cinematic Spectatorship Before the Apparatus"
—Many historians have examined the employment of self-referentialism at the turn of the 20th century as a challenge to the postmodern thesis . See Scott Bukatman on Winsor McCay.
—Kino Lorber's Pioneers of African American Cinema
—Watch Body & Soul and almost two dozen other works by race filmmakers on Netflix
—J. Hoberman discusses Oscar Micheaux in "Bad Movies: Wood, Edward and Micheaux" in Film Comment 16 (4): 1980, 7-12.
—Watch A Man There Was
—Read Henrik Ibsen’s Terje Vigen
—Little info exists on Heorhii Stabovyi and Two Days beyond Bohdan Y. Nebesio's "Competition from Ukraine: VUFKU and the Soviet Film Industry in the 1920s"
—The out of print box set, Ukrainian Re-vision
—Andrew Sarris on Lubitsch
—Farran Nehme Smith on Lubitsch for the Village Voice