"But Who Is The Dreamer?" Twin Peaks: The Return 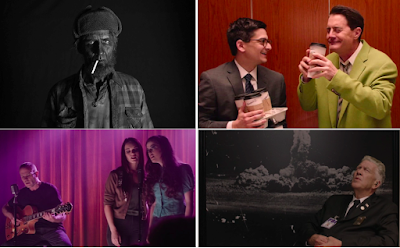 In a summer where blockbusters felt stale and indie films became rote, cinephilia thrived every Sunday night as David Lynch put on an 18-hour spectacle on primetime television. Twin Peaks: The Return saw the filmmaker behind Blue Velvet and Mulholland Dr. return to the soap opera that would in part define two decades of serialized television. He created not just a new spin on the story of Dale Cooper and Laura Palmer, but instead delved into a mystery that felt more aesthetically, narratively, and emotionally involved than any other visual story this year. As the boundaries between cinema, television, streaming, and other categories have become less defined, Twin Peaks: The Return lept past these debates to simply create an utterly singular work about the never ending battle between good and evil. To celebrate the show's culmination (and perhaps the capstone of Lynch's career), Peter invites a Roadhouse worthy group of  guests—Alison Herman of The Ringer, Scott Nye of Battleship Pretension and Criterion Cast, and Nate Fisher of Mubi Notebook—to dissect the show's use of nostalgic devices, moral dichotomies, and employment of experimental cinema techniques. Grab a coffee, watch out for the tulpas, and don't give anyone a light, we're all Twin Peaks this week on the podcast.