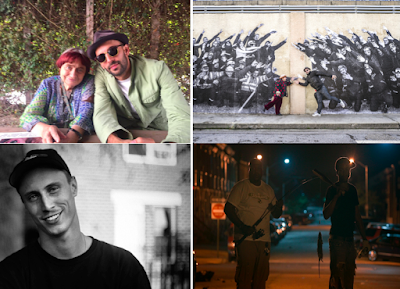 "An image is just a point to explore reality and memory."

As this podcast has explored, the limits of non-fiction have been continually pushed and pulled by daring filmmakers who refuse to understand the limits of what they can do. This week looks at two new releases from three creators asking questions of space, memory, history, and often themselves. First of all, Peter sits down with legendary French New Wave filmmaker Agnès Varda to discuss her new film, Visage Villages (in English, Faces Places), alongside her co-conspirator, the elusive street artist known as JR. They discuss the ins and outs of collaboration when their work ethics seemingly clash, the personalities they present on screen, and the "work" of their images. Then, Peter meets up with Baltimore filmmaker Theo Anthony to dissect his bold directorial debut, Rat Film. They discuss the alien style of the film and its interest in both the collection of data and the relation of its human subjects, all while asking how a film can provoke emotion and ideas in a diversity of ways without ever posing obvious solutions.

"Our aim for a lot of preservation—the standard goal—is to make it look
how it was seen before."

If more and more people are interested in shooting on film and projecting on film, there's one crucial step in between: how does film get from camera to screen? Through a lab obviously. But what does the lab do? Laura Major has been a staple at the Maryland based Colorlab for a number of years, helping the studio produce new 35mm negatives and positives of documentaries, experimental films, archival orphans, and more. Today, she sits down with Peter to trace out her own history from South Carolina to experimental film lover to a technician. They discuss the ins and outs of film processing and how Colorlab has integrated itself as a critical player in the future of celluloid. Finally, they dive into the Warren Beatty directed, Elaine May co-written Heaven Can Wait, a comedy built around a number of great performances and the strange odyssey that is the (now once again) Los Angeles Rams.