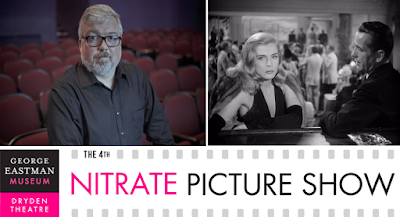 "It's not just the study of the narratives in the film, but the technique, process, and manual handling, which brings them into your hand."

The skyline of Rochester is filled with the industrial ghosts of the 20th century. However, the haunt is a more than a pleasant one, and perhaps the essential keeper of its history is the George Eastman Museum—a glowing monument to the history of both photography and the moving image. Jared Case has worked the Museum for over 18 years, and in particular has helped steer what has quickly become one of the go-to destinations for cinephiles: The Nitrate Picture Show. Peter attended the 4th iteration of the festival dedicated to the silvery, flammable material that preserved up cinema half-century, and then sat immediately down to discuss with Jared the work behind the scenes of such a wondrous event. Jared also explains the nuances of cataloging motion pictures, the development of a Technicolor database, and how to bring film preservation to the masses. Finally, the two look at John Cromwell's devilish noir Dead Reckoning with a witty Humphrey Bogart and the black hole of evil that is noir's most bad, bad girl, Lizabeth Scott. And as a bonus, Peter takes a tour of the Eastman Museum's frigid vaults to examine their 24,000 reels of film with Deborah Stoiber.