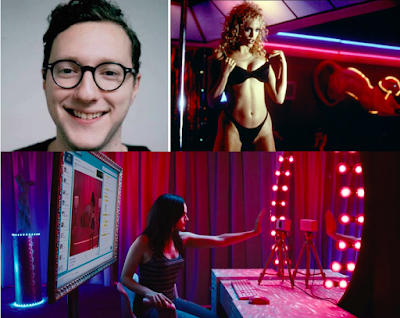 "For me, it's about finding ideas that are exciting and translating them in a bigger way."

The fine line between art and pornography is as old as visual culture itself, but only recently have those within the industry crafted their narratives for large scale audiences by avoiding the old hat critiques often placed on the profession. Cam, a new horror thriller financed by Blumhouse and made by the creative duo of Isa Mazzei and Daniel Goldhaber, does exactly that by following a cam girl as she fights to reclaim her identity. Dan sits down in this long ranging interview to discuss his creative apprenticeships on documentaries and the lessons he learned from Harvard, the work he and Isa did crafting pornography that thought seriously about aesthetics, and the creative workarounds necessary to make a good film about screen life. Finally, the two talk about Showgirls, a tricky film that nonetheless influenced Cam—Peter and Dan examine how and where the film takes these burlesque dancers seriously, and how the film straddles its campy existence. Plus, Carman Tse joins the show to talk about a few restorations that played the recent AFI Film Festival.

Faint memories of adventures abroad, the streets lined with buildings of the past, and the Disneyland rides long replaced. All memories of others, but preserved for us through the magic of 8 and 16mm celluloid. In this special episode, Peter travels inside the land of Home Movie Day is the show's first "experiential" podcast, recording the sounds and voices of this special event. Hear archivists, projectionists, and others who drudged up canisters from their attics discover the magic of this unique event in which no one knew what was going to be shown. From "Keystone Nuns" from Hungary to the Los Angeles Dodgers and King George II, learn about how home movies provide both historical and emotional experiences that these truly personal films could provide.