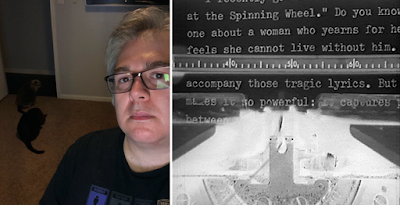 "What is this thing in front of us?...Why would somebody paint on film?...How successful is this 45 minute zoom?"

Given the ever growing plethora of criticism, it makes it more and more difficult to find critics whose every word feels inspired, and more than that, fewer critics who are even given spaces to write on films that create impassioned, reflective, and incisive prose and arguments. Houston-based writer Michael Sicinski is one of the rarities left today. His criticism makes experimental films that might alienate audiences feel accessible and who takes the liberal Hollywood schmaltz and demonstrates how alienating it can be. In this broad ranging interview, Michael takes Peter through his move from art history to cinema, the academic sphere to the internet, and from writing to teaching. The two then dive into Su Friedrich's haunting memory film Sink or Swim, and look at how a work that demonstrates formal rigor at every moment is also imbued with emotion that any audience can feel as well. Plus, Peter checks back in with former guest Eric Allen Hatch and his new non-profit video store in Baltimore, looking at how a seemingly "outdated" model of cinephilia might just save its future.