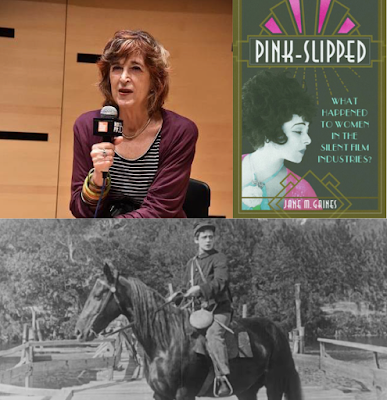 "So many of those social history accounts said there were no women in the industry...so what do you do with this overwhelming evidence?"

Unless you've had your head in the sand, the awareness of the women dominated Hollywood of the 1910s has moved out of academic circles and into popular discourse. Instead of asking what happened to these women, film scholar Jane Gaines has another: why has this only now become part of our history? A pioneering scholar in mixed-race films, copyright, and documentary, Gaines's latest, long gestating book Pink Slipped mines film studies's own history to look at the reasons and problems of telling history through this one paradigm. In this winding conversation, Jane explores her own history and what led her to explore this problem and where history goes from here. They end their conversation looking at one particularly fascinating woman—Gene Gauntier—who beat out Pearl White and Helen Holmes as the first serial star by playing a cross-dressing confederate spy. A not to be missed discussion! Plus, Peter delivers some thoughts on a rediscovered and restored British drama exploring the Jamaican diaspora.

Notes and Links to the Conversation
—Learn more about Jane Gaines and her book, Pink Slipped. See her other critical texts: Fire and Desire: Mixed Race Movies in the Silent Era, Contested Culture: The Image, the Voice, and the Law, and Collecting Visible Evidence
—See the Women Pioneers Film Project
—The boulder scene in The Searchers
—Donald Crafton's speech was for his award as the Society for Cinema and Media Studies's Distinguished Scholar Award. Gaines won the award in 2018.
—Learn more about the Northwestern Feminist Film Movement and the Feminar
—Laura Mulvey's "Visual Pleasure and Narrative Cinema"
—Watch Oscar Micheaux's Within Our Gates and other pioneering African American films on Netflix
—Chris Horak discusses Susan Dalton here
—See Gaines's discussion of discovering Micheaux in her book as well as her essay in Black American Cinema
—The TCM Broadcast of Micheaux's The Symbol of the Unconquered has been uploaded to YouTube
—See the work and research of Anthony Slide, Ally Acker, and Sharon Smith
—Listen to our previous conversation with Shelley Stamp and the Kino Lorber Box Set she curated
—Names mentioned by Jane: Tazuko Sakane, Mary Maclane, and Stefania Socha (Jane accidentally called her Sonia)
—Jane's 2004 manifesto on film history and feminism
—See the Women and Film Archives on Jump Cut — Smith's original article appears in Issue #4
—Gaines has written on melodrama numerous times, including on the family melodrama, on Marxism as a melodrama, on melodrama in the Soviet Union, and the archival rescue as melodrama
—Christine Gledhill has also explored melodrama as a mode
—Manhola Dargis accidentally citing The Cabbage Fairy as the first fictional film
—Kristin Thompson's Exporting Entertainment is available as a PDF on her website.
—The two best books that answer the "what happened" question is Karen Mahar's Women Filmmakers in Early Hollywood and Mark Cooper's Universal Women
—Watch Gene Gauntier's The Girl Spy Before Vicksburg and two other Gauntier films here.
—Read her profile on the WFPP, Tony Tracy's piece on her career, and Gaines on their odd print history.
—More on the Ben-Hur (1907) controversy that set the precedent for moving image copyright
—Learn more about Dormitor
—The only copy of Gauntier's Blazing the Trail is at the Amsterdam Eye Institute