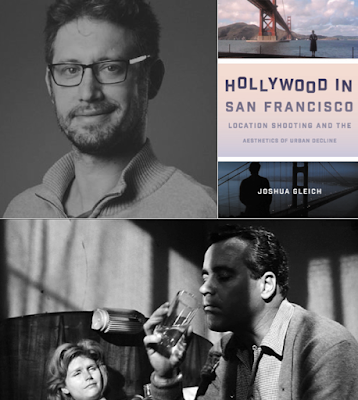 "I think one of the reasons I work on location shooting is not because I understand it completely but because I have a question I still can't answer."

For anyone whose lived in Los Angeles or New York, it's easy to see when a film cheats its its locales. Just watch John Wick 3 and see the eponymous character seemingly make the trip from Midtown to Chinatown in a matter of minutes—and all by foot. But why has location shooting evolved such as it is? Joshua Gleich, a historian making his home at the University of Arizona, Tuscon, explores this by looking at the city of fog, San Francisco. Less an exploration of which films "get it right" or "get it wrong," Gleich's new book explores the evolution of location shooting from the 1940s to the 1970s, and how curiously the films of SF soon diverted from its actual life, attempting to mimic the urban nightmares that took up the imagination of Hollywood. Josh talks about his new book with Peter, exploring a number of classic films and the production contexts that made them. Finally, the two explore Blake Edwards's alcoholic drama Days of Wine and Roses and how a little location shooting can help pepper an entire film, especially one that breaks many of the molds of the classic Hollywood melodrama. Plus, Peter praises the work of the back-in-action Le Cinema Club and its opener with a rare Claire Denis short made in New York.