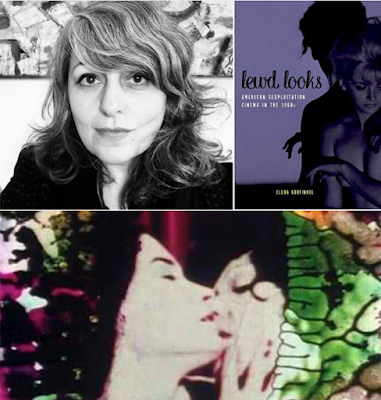 "What is it about sexuality in cinema that is a marker of the present?"

As this podcast has aimed to define, those who watch cinema can often be more revealing of culture than cinema itself. In her book, Lewd Looks, Elena Gorfinkel explores the sexploitation era of the 1960s. However, she looks past the texts to consider some of the more aspects of spectators and the public who shaped this unique era. The result is a fascinating text that considers cinephilia's history in ways that imagines both a more dynamic and complex past alongside a new way of formulating our current moment. Peter and Elena go on to discuss the issues surrounding cinephilia today and Elena's own work outside of the academic halls. Finally, Elena brings in the fascinating experimental work The Color of Love from filmmaker Peggy Ahwesh, considering how this work literally found in a dumpster becomes a cinephilie love letter to another forgotten filmmaker.

Notes and Links to the Conversation
—Learn more about Elena and follow her on Twitter.
—Purchase a copy of Lewd Looks: American Sexploitation Cinema in the 1960s
—Elena recently also edited an issue of Feminist Media Histories on Adult Media
—Check out Historian Louis J. Kern's book on sex in Mormon communities, An Ordered Love: Sex Roles and Sexuality in Victorian Utopias
—Buy a DVD of Doris Wishman's Double Agent 73
—Stream numerous sexploitation films through byNWR
—Find a copy of Censored (1965)
—For more on the transformations of the Production Code and the development of CARA (aka the Ratings System), read The Dame in the Kimono
—For more on New York State Censorship, see Laura Wittern-Keller's Freedom of the Screen: Legal Challenges to State Film Censorship, 1915-1981
—Learn more about Nudie Cuties from this Something Weird presentation
—Watch Office Love In (1968)
—Purchase The Olga Trilogy on DVD
—The reference to the 1964 Supreme Court case is Jacobellis v. Ohio.
—Jonas Mekas's discussions of pornographic houses appears in Movie Journal: The Rise of the New American Cinema, 1959-1971
—Read Samuel R. Delany's Times Square Red, Times Square Blue
—Susan Sontag's The Decay of Cinema
—Elena on the tired bodies of slow cinema
—Elena discusses the "dichotomy" here.
—Books on Parker Tyler: David Bordwell's The Rhapsodes and Greg Taylor's Artists in the Audience
—Elena and Jonathan Buchsbaum's Intro to their Cinephilia Survey? (Scroll down here to see the responses)
—Girish Shambu's Manifesto "For A New Cinephilia"
—After our discussion, Elena wanted to add praise for Erika Balsom's "The Critic Lady" and "The Dominance of the White Male Critic" and Elizabeth Méndez Berry and Chi-hui Yang.
—Paul Willeman's essays on cinephilia appear in Looks and Frictions
—Elena discusses The Color of Love
—The Color of Love is available through Film-Makers Co-Op, EAI, and Light Cone
—Watch Bill Morrison's Desica
—Elena recently wrote about Ahwesh's zine on Doris Wishman for Cinema Scope (print only). You can buy the reprinted zine here.
—Ahwesh's Tomb Raider inspired avant garde work She Puppet is available for EAI