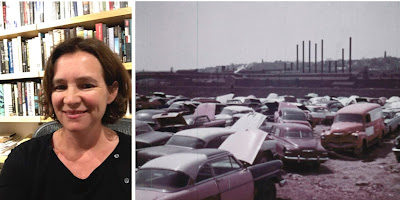 Today's episode features Jennifer Peterson, Professor and Chair of the Department of Communication at Woodbury University and author of Education in the School of Dreams: Travelogues and Early Nonfiction Film. We discuss her article for the "Medicine on Screen" program for the National Library of Medicine entitled "Darkening Day: Air Pollution Films and Environmental Awareness, 1960–1972." Peterson examines a select series of films from the postwar era, all sponsored by the United States government, that tackled growing concerns about air pollution and other environmental concerns in a world before the Environmental Protection Agency. The two look at unique aspects that make these films shocking today, not just for their strong anti-corporate advocacy but often their aesthetic qualities that reflected the experimental films of the era. But Peterson also acknowledges the limitations they held to advocate for positions by turning away from mass mobilization or community organizing by putting trust in the government, a position hard to rationalize in today's continuing climate emergency.
Right Click here to download the episode