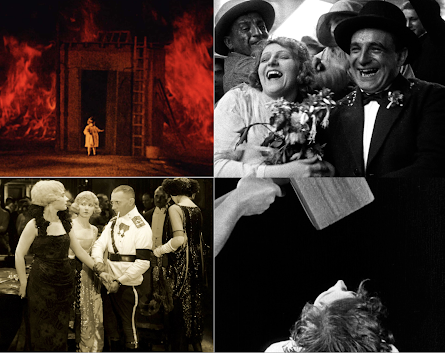 Three years of absence from the San Francisco Silent Film Festival has only left a longing in Peter's heart. And while The Cinephiliacs remains on permanent hiatus, the return of the best festival in the United States meant a necessary return to podcasting, especially when frequent co-host Victor Morton joining him. In this go around, they marvel at the masters, uncover the unknowns, and celebrate the colors. Watching films across Europe, Ukraine, and Japan, these films once again show us that silent film is not just about finding the old, but seeing anew through the incredible work of archivists, restoration work, and orchestras providing a highlight in the grand ol' Castro Theatre. This might just be a one-off episode, but what better than the Silent Fest to reignite the flames of cinephilia—particularly with fire on screen.

Right Click here to download the episode
Notes and Links to the Conversation
—Thanks to the guest Victor Morton and see his reviews of all the films at Silent Fest!
—Learn more about the San Francisco Silent Film Festival!
—Apologies about some of the noise in this episode!
—More on Arrest Warrant
—Peter and Victor previously spoke about Two Days on this episode
—Eddie Muller on The Cinephiliacs
—More on VUFKU (All-Ukrainian Photo Cinema Administration)
—The Dovzhenko Film Archive can be supported here.
—Peter recommends the excellent book, Not According to Plan by Maria Belodubrovskaya and Denise Youngblood's Soviet Cinema in the Silent Era, 1918–1935 about some of the industrial conditions in Soviet filmmaking that challenge many preconceived notions,
—The circus film Peter mentions is Two-Buldi-Two (Kuleshov, USSR, 1929)
—More on Blind Husbands and Foolish Wives
—The Wedding March was discussed in 2019
—For more on the lost film, The Devil's Passkey, see Richard Koszarski's book The Man You Loved to Hate: Erich Von Stroheim and Hollywood
—More more on the digital restoration of Blind Husbands, see here
—More on Apart from You
—Dan Sallitt's notes on all films by Mikio Naruse
—More on the sad fate of Japanese silent film
—More on King of the Circus
—Max Linder at Essanay Film Studios in Niles Canyon, CA
—More on Serge Bromberg and the difficult restoration work
—Richard Abel has written about the difficult celebrity of Linder and his shocking end
—More on Dans la Nuit
—Bilge Ebiri on Bernard Tavernier
—More on the Zhang Yimou Film, One Second
—A bit on the restoration of the film can be found in this HFPA booklet
—More on The Fire Brigade
—Learn more about Handshiegl and other color processes from the silent era
—There's nothing online yet about the amazing work done by the Library of Congress, but here's a small video highlighting their great restorationist, Heather Linville!